Branca was 14 weeks pregnant when she decided to come to Sidra Medicine to seek a second ultrasound opinion with the Maternal Fetal Medicine team.

“It was an uncertain time for us as this was our first pregnancy and at my 12 week scan at another clinic, it was identified that my baby had a major abdominal wall defect known as Omphalocele. This meant that his bowels, liver and other organs were sticking outside the abdomen, in a sac. The clinic also didn’t have the expertise in being able to advise next steps regarding babies born with the condition,” Branca said.

“Our excitement soon turned into fear and anxiety of not being able to understand the future prospects of my pregnancy. We decided to come to Sidra Medicine after hearing so much about its excellent fetal medicine and pediatric services. We felt hopeful that they would be able to provide answers to our questions,” continued Branca. 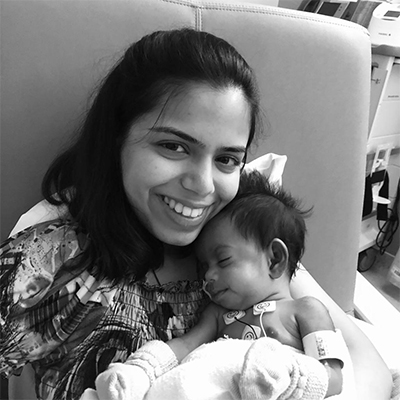 During the consultations at Sidra Medicine, a multi-disciplinary team of physicians from maternal fetal medicine, neonatology and pediatric surgery met with Branca and her husband to discuss the options available regarding her baby’s condition and the care that Sidra Medicine would be able to provide.

“I vividly remember the warmth, support and positivity the entire team of specialists provided us during our first meeting. They gave us hope that the pregnancy could continue and that they would be able to give the most appropriate care after I gave birth,” said Branca. 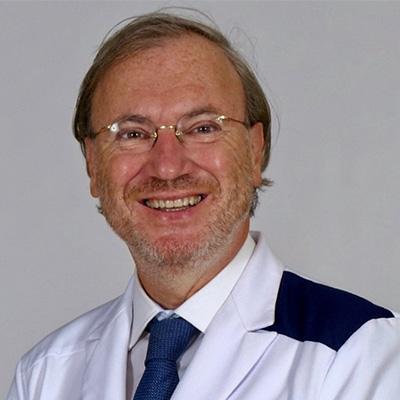 Prof. Karim Kalache, Division Chief of Maternal Fetal-Medicine at Sidra Medicine, said: “Omphalocele is a rare condition that affects 1 in 5,000 births.  Sidra Medicine has dealt with several cases in Qatar and we were well placed to guide the parents through the treatment and care process. It was critical to determine the size of the defect on the baby, which organs were affected, and to exclude associated anomalies. It was also important that the parents were aware of the risks and the opportunities of personalized care and treatment available.  We discussed the wide spectrum of outcomes to ensure that Branca and her husband were able to make an informed decision regarding the birth and care program.”

Following regular monitoring of both mother and baby, Branca gave birth to Mikhail via a planned caesarian section at Sidra Medicine on the 5th of March 2019. A team of specialists were on hand to ensure that Mikhail would receive immediate medical attention as soon as he was born.

“The minute he was born my heart leapt for joy on hearing the tiniest cry. He made it out alive and breathing by himself without any respiratory support. This was his first big accomplishment. The transition from breathing in-utero to normal air without any respiratory support is a big miracle as most babies born with Omphalocele, require breathing support due to the pressure on their lungs. We named him Mikhail, and he has been a fighter and trooper since then. We knew that we would be in safe hands at Sidra Medicine and felt supported every step of the way,” continued Branca. 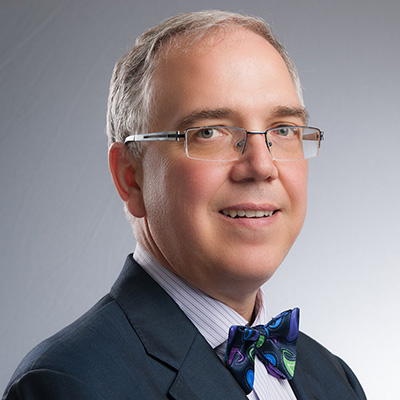 Dr. Guy Brisseau, Senior Attending Physician in General and Thoracic Surgery at Sidra Medicine said: “Children born with Omphalocele can sometimes also have problems with their heart, spine, lungs as well as digestive organs. After Mikhail was born, he underwent a thorough check up and once it was determined that he wasn’t at risk with other conditions, apart from the large Omphalocele, we elected to allow the skin on his abdomen to grow over. And that he would undergo the next procedure until he turned two or three years old. This method called the “Paint and Wait” technique that would assist in skin formation over the thin sac.  It would allow his belly to grow and be stretched enough before surgery. The repair to his abdomen required that the process of care and treatment, be carried out in stages.”

“Many different dressings are available to “paint” the thin sac to protect it from damage and bacteria. We also decided to use a new but ancient technique of honey dressings.  Medicinal honey uses the natural ingredients of honey to physically protect the thin sac while we waited for the skin to grow over and protect the sac. Medicinal honey does not have the side effects of previous dressings,” continued Dr. Brisseau.

Mikhail was admitted to Sidra Medicine’s Neonatal ICU as his condition required constant supervision, especially during feeding times as his intestines was partially outside his body. 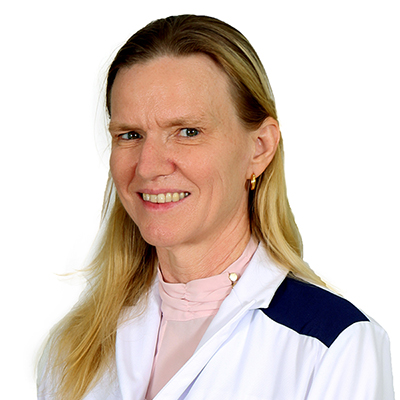 Dr. Charlotte Tscherning, Div. Chief of NICU at Sidra Medicine said: “Mikhail stayed in our NICU for approximately two months. Feeding babies with Omphalocele is a challenge and requires specialist expertise. In order to support his growth, nutrition was given through a central venous line into the blood (parenteral nutrition). Mikhail was fully fed with milk at only one month of age. The milk was started slowly and was gradually increased. This management is extremely precise and difficult, as many complications can occur.  In close collaboration with the surgical team, our NICU team managed to support the growth of Mikhail and to discharge him safely.  We are very happy to see Mikhail’s progress and I would like to acknowledge our world-class NICU team who work round the clock in helping newborn babies like Mikhail in their care and recovery.”

Branca said: “During Mikhail’s entire stay at NICU, we received great mental health support. As a NICU mother, the raw images of what your child goes through can have a lasting impact on your well-being. I was so touched that the team celebrated Mother’s day and gave away small gifts for all the NICU mothers which was very thoughtful and reassuring that no matter how your child is born and no matter what condition they have, you still are a mother and a strong mother. Mikhail’s stay at NICU was fantastic and he received the best care from the NICU trained nurses, doctors, speech specialists, occupational specialists who provided Mikhail and us with holistic treatment and support. As parents we learnt a lot and grew so much during our stay”.

Mikhail stayed in the neonatal ICU at Sidra Medicine for nearly two and a half months, after which he was discharged. Thanks to a regimen of medication, good skin care and nutrition, his health progressed. However, in July 2020 during the peak of Covid-19, Mikhail was rushed to the children’s emergency department at Sidra Medicine as he started to unexpectedly vomiting black- greenish fluids.

A gastrointestinal scan confirmed that Mikhail had developed an obstruction to his bowel, known as a paraduodenal hernia, a rare congenital anomaly where his small intestine became trapped. The potentially life-threatening condition needed to be treated immediately. Mikhail went into emergency surgery to fix the bowel obstruction. This surgery took three hours and involved a team of two surgeons, three anesthetists and three nurses.  Given the need for emergency surgery, the surgeons decided they could also close his belly muscle and fix the omphalocele 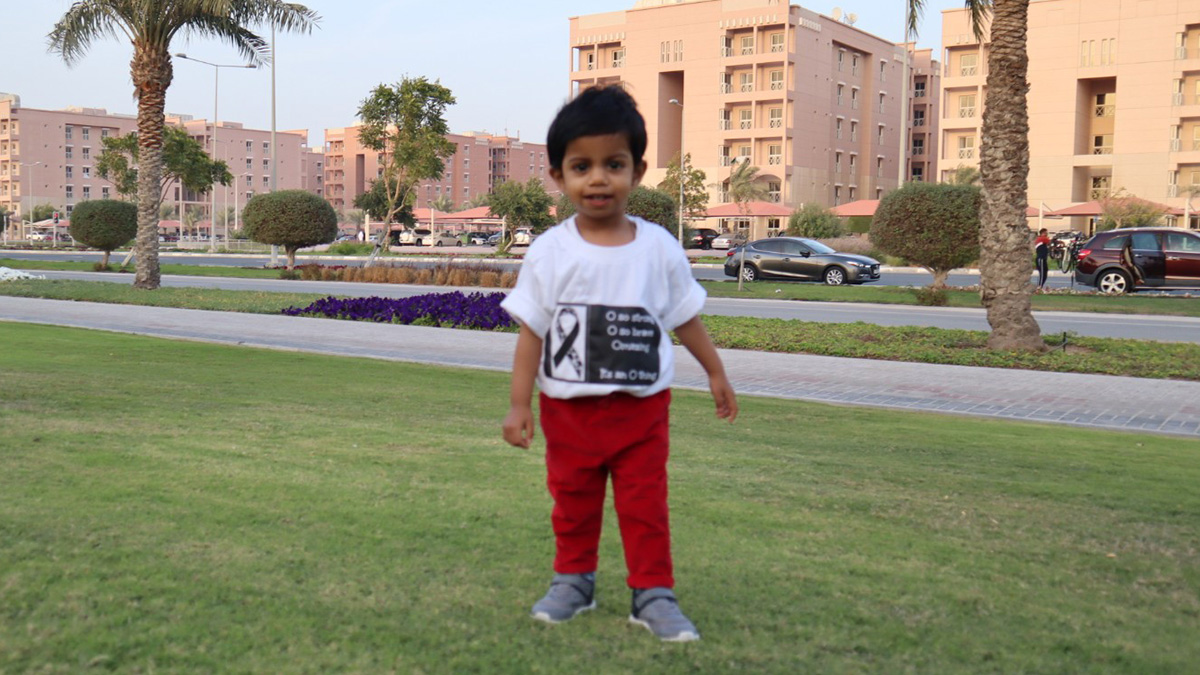 The surgery was a major success where the surgeons rectified the hernia as well as closed the abdominal defect without the use of any mesh. After spending eight days in the pediatric intensive care unit and floor, Mikhail was sent home, and recovered in two months. He still regularly comes to Sidra Medicine for check-ups.

“Today if you see Mikhail, he is a chatty, bubbly and positive little boy. No one can ever believe that our little champ has been through so much. We are proud parents of a very strong little boy! He has taught us many life lessons which we will forever cherish. We are immensely grateful to the wonderful team at Sidra Medicine. Thank you,” said Mikhail’s parents.